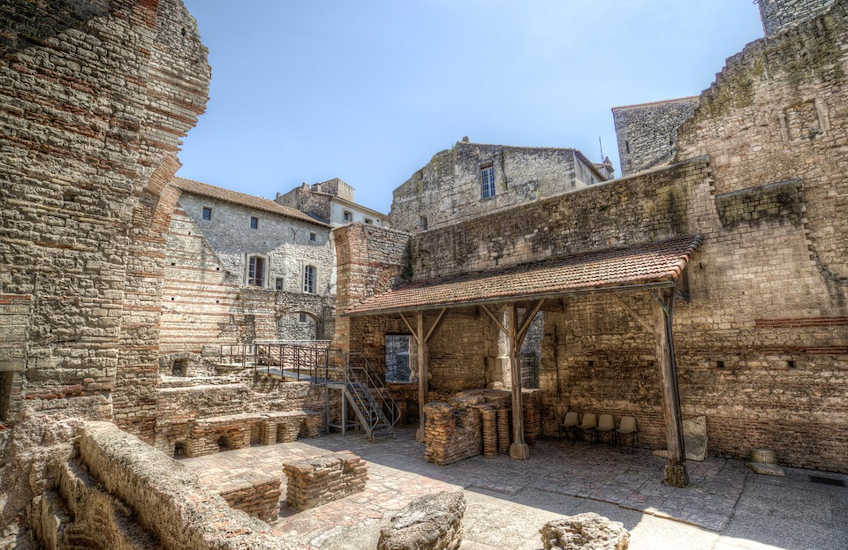 The Languedoc is an amazing historical region of France to discover. It has more historic sites to explore than any other region of France outside of Paris. Within the Languedoc, there are 6 UNESCO World heritage sites, as well as numerous other tourist sites covering Palaeolithic cave paintings, Roman monuments, Cathar ruins, medieval hilltop villages and remnants from the early industrial age. The history of the region is as diverse as it is long and there can be no better place in France to explore. An excellent way to tour all the historical sites in the Languedoc is to obtain a visitor pass from the organisation called Sites de Exception. This organisation promotes over 20 major cultural and historical tourism sites across the departments of Herault, Gard and Aveyron.

The visitor pass provides discounted entry rates to range of places of interest, including the Roman amphitheatre in Nimes, the Bamboo gardens in Anduze, the Millau viaduct, the Abbey Valmagne monastery, and the caves at Gotte de Clamouse.

The Languedoc region possesses 6 outstanding World Heritage sites, which have been designated as historically important by the international organisation for promoting and protecting education, science and cultural resources (UNESCO).

These sites include the majestic medieval castle at Carcassonne; the Canal du Midi, which flows from Toulouse in the West to the Mediterranean sea in the East; the Pont du Gard Roman aqueduct, which carried water 40km from Uzes to the Roman garrison town of Nimes; the beautiful medieval village of St-Guilhem-le-Desert, once a refuge from religious persecution and also situated along the famous pilgrim trail to Santiago de Compostela; and the Roman amphitheatre and chariot racing circuit in Arles.

Architectural sites to visit in Languedoc

The Languedoc has many fascinating architectural sites including the Pont du Gard Roman aqueduct, near Uzes and the Millau Bridge designed by Sir Norman Foster. You can also enjoy another of Foster's creations in the Languedoc, by visiting the Modern Art Museum in Nimes.

In the nearby town of Arles, once home of the artists van Gogh and Paul Gauguin, work is about to be completed on the Luma Arles art complex, designed by architect Frank Gehry. The Luma tower is a twisting metal structure which soars 56 meters above the town. The Luma Arles arts centre was established by the Swiss collector, Maja Hoffmann, and will feature prominent art work from artists associated with the town, as well as providing studio space for modern artists in residence. The tower is due to be completed by spring 2022.

Another site to enjoy is the recently renovated Ecluses de Fonseranes in Beziers. This engineering masterpiece from the 17th Century, involves 9 inter-linked locks which transports canal boats down 20m from the high point of the Canal du Midi, to the lower stretches of the Canal at Beziers, just by the power of water alone.

The full list of Exceptional historical sites to visit in Languedoc include:

The Sites d’Exception en Languedoc provide a free Privilege Card, valid for 2 people. You can now take advantage of lower prices on all of the network’s member tourist sites.

To obtain your visitor pass from the the website Sites de Exception, or alternatively, if you visit any of the sites listed above you can purchase the privilege card. The card allows you to enjoy up to €3 Euros discount per person to enter any of the historical sites and up to 10% off their partner services: barge ride along the Canal du Midi, tasting and buying wine or organic olive oil…

Go Languedoc provides holiday accommodation, long term rentals and tourism information about the South of France - covering Cote d'Azur, Provence and the Languedoc. If you would like some more detailed information or if you have any questions about finding accommodation for your visit, then just drop us a quick message and we will come straight back to you. I wish you a wonderful stay in the South of France. Contact Iain by Email or by phone +33 6 95 00 28 44.