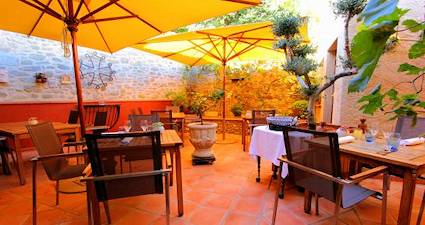 I have never eaten here, but friends of ours reckon that it is the pick of the Languedoc restaurants in Carcassonne's medieval city. This family-run bistro serves classy, beautifully presented French cuisine in an old shuttered Auberge. The head chef is Marius Bernard, who has run this Carcassonne restaurant since 1985. Inside, the restaurant contains the original wooden beams and fireplace. The menu at La Marquière contains many regional dishes such as cassoulet, duck breasts, fillets of Charolais beef, salmon and trout tartare with ginger and citrus, or a Bourride of monkfish on crushed tomato toast. When our friends went they both had the Foie gras Raviolis with mushroom ceps sauce which they said was sublime. The restaurant has a huge wine list and it is supposedly the best wine cellar in the region. There is a really nice courtyard which is a great place to sit from April through to October. This restaurant is closed on Wednesdays and Thursdays out of the summer season. During the summer La Marquière is open from 12.00-2.30pm & 19.00-10.30pm.