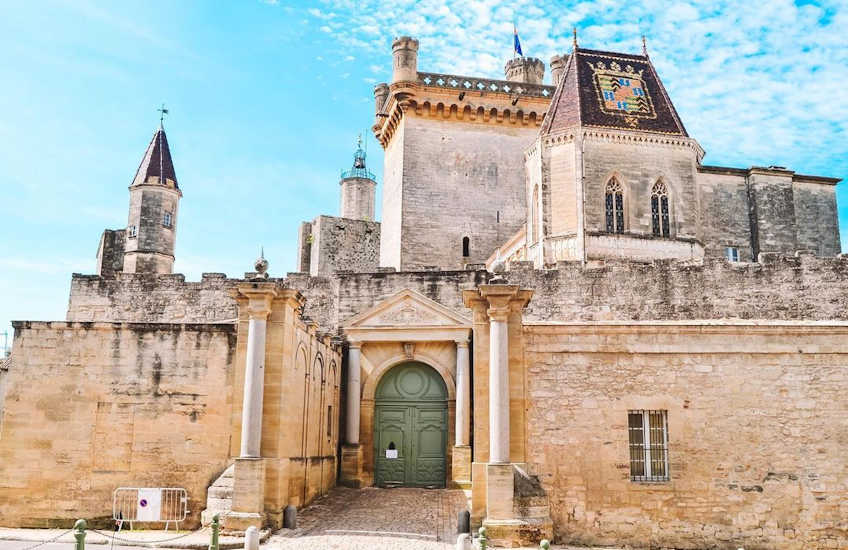 Uzes, France is a very pretty town to visit in the Gard region close to Provence. We recently spent a weekend there and we had a great time. Together with Aix en Provence, St Remy. Aigues Mortes, Avignon, Sommieres, Lagrasse, Carcassonne and Pezenas; Uzes really ought to be up there on your list of places to visit if you are planning a tour of the South of France. The best time to visit Uzes is during the Saturday morning market, when the whole comes alive with stallholders selling fresh local produce including truffles, herbs, olive oil and handmade preserves.

Uzes grew prosperous in the 16th century as a centre for textiles. At one point the town employed 2,000 people in various silk factories. The town retains many of the old merchant houses, which are now protected monuments. Uzes was also the town of the Duchy of Uzes (a family very loyal to the French monarchy - so loyal in fact, 21 Dukes died fighting various battles on behalf of the French Kings down the years!). Despite going into exile after the French revolution, the family got some of their property back under the Restauration and the family still owns the chateau with its colourful roof right smack bang in the middle of the town. During the Religious wars in France during the 16th century, Uzes was the 5th largest protestant town in France - not a great thing to advertise when you are living in Catholic France! Going further back, Uzes, France was the source of the water that the Romans used to irrigate Nimes and which led to the building of the famous Pont du Gard aqueduct. Uzes later claim to fame was as the location of the Zan liquorice factory, now part of the Haribo company. 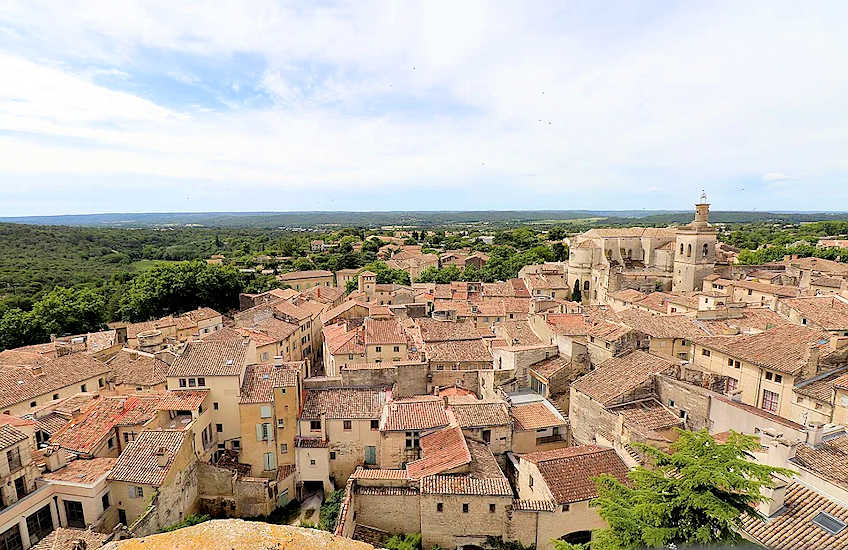 In the centre of Uzes, South France there are lots of narrow streets with little boutiques arranged around the old Duchy. In the centre you will find a big square (Place aux Herbes), laid out with fountains and plenty of decent restaurants. Whilst we were visiting, there was a big Arts Fair going on - which really sums up Uzes - it is a big art loving town. Uzes and region have a bit of a reputation as a foodies paradise. The Saturday market in Uzes takes over most of the town and it is very good (as well as busy). You will also find a number of good restaurants in Uzes (although I have to admit, whenever I go to Uzes I always go to the same Gourmet Burger restaurant in the main square - yes I know it is shameless, but they are the best burgers in the South of France.

The other reason for coming to Uzes, France (especially if you have kids - or a sweet tooth) is to visit the Haribo sweet museum. I took my three little monkeys there and they absolutely loved. It was like Willy Wonkas Chocolate factory! There were plenty of free sweets, some boring exhibits of old sweet manufacture and more interesting interactive displays about how they make the sweets today. The shop on the way out is something to behold. It cost me a small fortune.

I like the Gard. It is very picturesque. There are lots of tree lined country roads, vineyards and scenic hills covered in the famous Garrigue (stubbly bushes) and Olive tress. It makes driving through the area very pleasant. Near to Uzes you have Nimes, the Pont du Gard , Avignon, Anduze and to the north, the very picturesque Gorges d'Ardeche (with its famous site of Pont d'Arc).

Uzes weather during the year

The weather in Uzes is usually pretty good all year around. The summers are dry and hot with an average temperature of 30oC. I think the best time of year to visit Uzes is either from April to June or from September to October. During these periods you will find that the temperature is around a pleasant 18-25oC. During the winter months the temperature can dip down to 3-4oC at night, but usually the days are bright, with powder blue skies for much of the winter period. During the day, even in December, you would expect to get around 11-14oC

Check out the Best markets in South France to visit